News from the Women’s Museum Mexico in March 2020 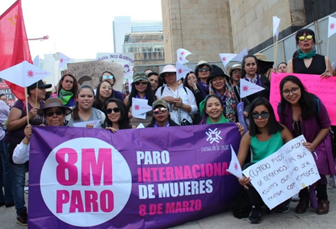 END_OF_DOCUMENT_TOKEN_TO_BE_REPLACED

Facing the forgetfulness. Claiming social struggles and achievements of feminism

On March 5th, the Museo de la Mujer in Mexico City will inaugurate the temporary exhibition “Facing the forgetfulness. Claiming social struggles and achievements of feminism”(Enfrentando la desmemoria. Reivindicando las luchas sociales y los logros del feminismo). It is composed by works of 32 artists from different countries (such as Mexico, Brazil, Chile, Colombia, Spain, France, Poland and Russia), and it is dedicated to women who have been victims of violence and to those who have fought for the feminism struggles.

END_OF_DOCUMENT_TOKEN_TO_BE_REPLACED

Our concern because, despite some progress by women in the world, we continue to face the invisibility of our contributions in all fields: social, economic, political, artistic and cultural.

In the  Congress we verified the normalization and naturalization of a patriarchal policy expressed in violence against women, among the most recognized forms are physical, psychological, patrimonial and sexual violence, and among the least recognized forms of violence are seen in the media, epistemic and symbolic. From everyday violence to the most lethal , including femicides, regardless of age, country, ethnic-racial origin or social class.

We believe that the invisibility of women is a form of symbolic violence that the creation of Women’s Museums attempts to confront, since they propose a space to recover the memory, history, struggles and contributions of diverse women, for communication and the sharing of knowledge. It is a political action to strengthen collective consciousness, resistance, vindication and rebellion against the perverse results of hegemonic neoliberal and heteropatriarchal capitalist structures that affect humanity, particularly women and children.

Our demand to make women visible is an act of justice because we are half the population in the world, and most women still remain in conditions of inequality, discrimination and marginalization, and suffer from the effects of racism and religious fundamentalisms.

From the governments of our countries, the guarantee of our rights, a decided support policy for opening up and sustaining spaces for the memory and history of women of all peoples, due to the scarce number of existing places, some spaces are at risk of disappearing due to lack of resources and social and institutional support.

From international bodies, to strengthen their action in the areas of their competence at the seriousness of the condition of women, especially those who are in refuge from wars, in contexts of irregular migration, trafficking of people for labor and sexual exploitation, also in situations of daily violence, all expressions that threaten peace and development in all spaces, from families, communities, countries, to the international arena.

We call on countries, agencies, social organizations and civil society to redouble their efforts to ensure the human rights of women, and sustainable development in conditions of substantive equality that guarantee life with the dignity of the people, the peoples, and the planet that inhabits.

The Countdown is on!! -4 days until our Fifth International Congress of Women’s Museums in Mexico City

The detailed program for the conference in English: program-english-pdf 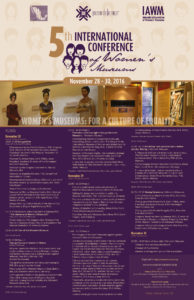 Only one month left!

In only one month we will meet in Mexico City for our Fifth International Conference of Women’s Museums. We are looking forward to meet our members! 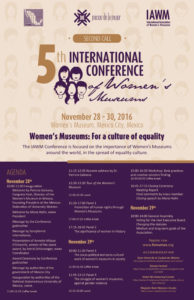 In two months we will meet in Mexico City for the Fifth International Conference of Women’s Museums. We are looking forward to insightful workshops, vibrant discussions and a lot of networking!