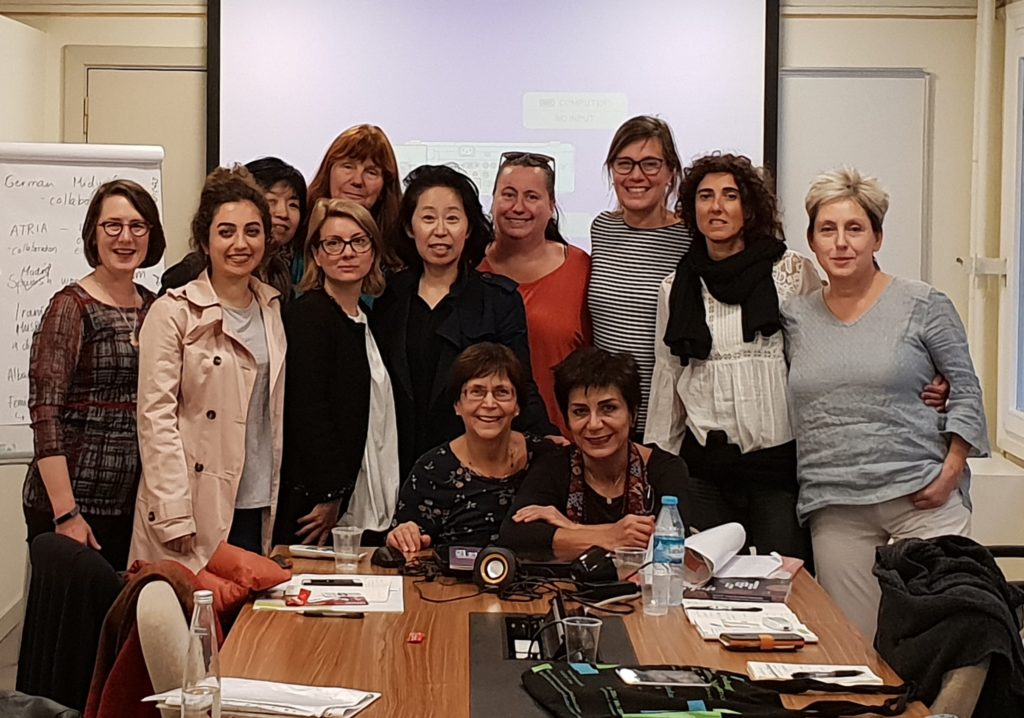 The goal of this meeting was to enable exchange and synergies amongst Asian and European women’s museums. Therefore the day started off with every participant presenting the status quo, the troubles, and future plans of their own museum, organization or initiative.

The situations of museums and initiatives around the world are different and everyone shared moving and inspiring insights. Despite the differences, common points as well as collective projects for the future could be found.

Topics on the agenda were amongst others talks about the first Asian regional Women’s Museums conference in 2019, the application for an EU project of several women’s museums in Europe who will collaborate with their colleagues around the world, the Iranian Women’s Rights Museum in Diaspora, the situation of women’s museums in Africa, the postponed regional conference of women’s museums of Latin America and the Caribbean, and the realization of a Feminist Museum Hack day. 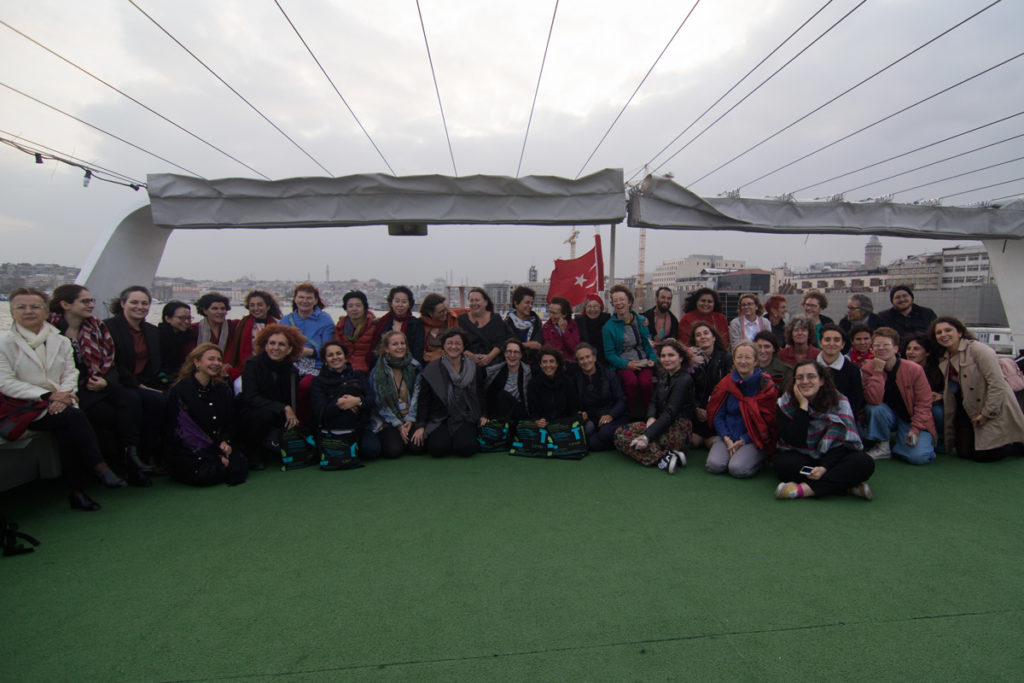 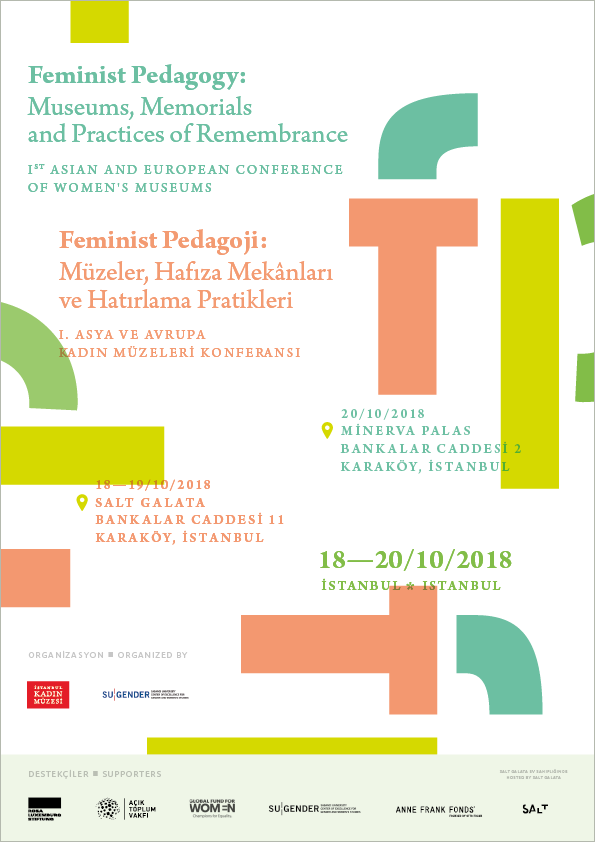 The Women’s Museum Istanbul and Sabanci University Gender and Women’s Studies Center of Excellence organized the conference in Istanbul. The conference invited museum and gender professionals, activists, and scholars working on gender-sensible concepts of around the world.

It was a significant achievement of the Women’s Museum Istanbul and SU Gender to have realized this conference around the topic of Feminist Pedagogy, which is important to all women’s museums.

The opening remarks to the conference were given by representatives of the Women’s Museum Istanbul, by Sabanci University Gender, and the president of IAWM Mona Holm.

Mona Holm caught the occasion to look back on the last 10 years in which the network of women’s museums has developed since its foundation at the First International Conference of Women’s Museums at Meran, Italy in 2008.

Also the president of the International Council of Museums (ICOM) Suay Aksoy joined the opening remarks. Already two years ago she was present at the women’s museums conference in Istanbul. We are glad to see this as confirmation that the international museum community shows growing interest in the developments and contents of women’s museums. 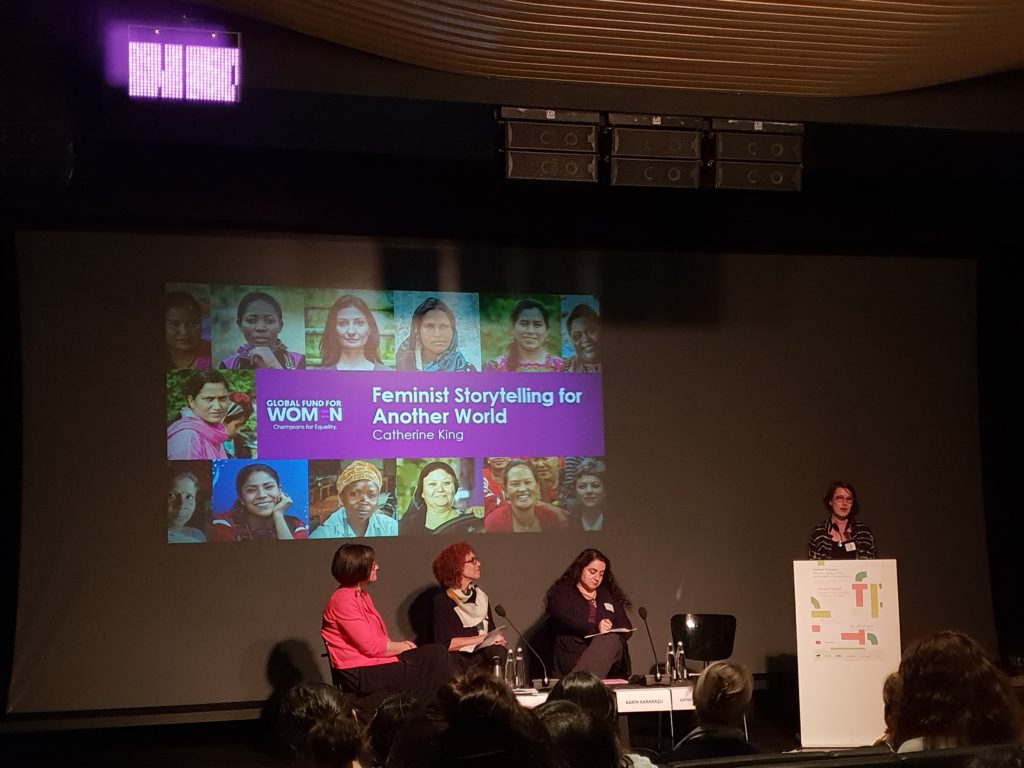 The first panel of the conference with the title “Feminist Storytelling For Another World” included interesting talks about this topic. Amongst the speakers was our member Catherine King from Global Fund for Women. She discussed the newest projects of her organization which include important support for grassroots women’s movements, but also feminist storytelling, which is very close to the work of women’s museums.

The second panel was about “Feminist Storytelling As Border Crossing”. Mansoureh Shojahee from the Museum of the Iranian Women’s Movement told the moving story of the godmother of IAWM, Shirin Ebadi, and herself. She had the goal of the foundation of a women’s museum in Iran and therefore has to live in diaspora. She closed her talk with the significant phrase that despite she is living in diaspora, in the sisterhood of IAWM she found a new family. Kye-Hyeong Ki from History Women Future in Seoul, Korea has described vividly the work of her museum that is looking beyond art at women’s histories. The newest member of IAWM, Maissan Hassan reports about the realization of the project of The Women and Memory Forum in Gize, Egypt, which confirms once again the importance of feminist pedagogy.

The third panel called “Creating a Feminist Archive” included very interesting reports of different women’s archives: Elena Petricola of the Women’s Archive in Turin, Italy; Berna Ekal of Altınbaş University, Istanbul and the publisher Ulfet Taylı from Istanbul; Fusun Ertuğ from the Women’s Library and Information Centre, Istanbul; Morag Smith from Glasgow Women’s Library; and the researcher and archivist Zeyneb Yaş from Diyarbakır; Fusun invited the representants of women’s museums to a spontaneous tour in the archives of the Women’s Library Istanbul.

On the second day of the conference various workshops took place.

The coordinator of IAWM, Astrid Schönweger, conducted the workshop “How do women and gender-oriented museums differ from other museums and places of memory? What is their contribution to cultures of remembrance?”

The workshop started out with a short introduction and a statement from IAWM and with several concrete examples from women’s museums. Together with the participants a collective statement about possible concrete contributions of women’s and gender oriented museums to cultures of remembrance was drafted. The outcomes of the workshop show the main differences between women’s museums and other museums:

Contributions of women’s museums to cultures of remembrance: 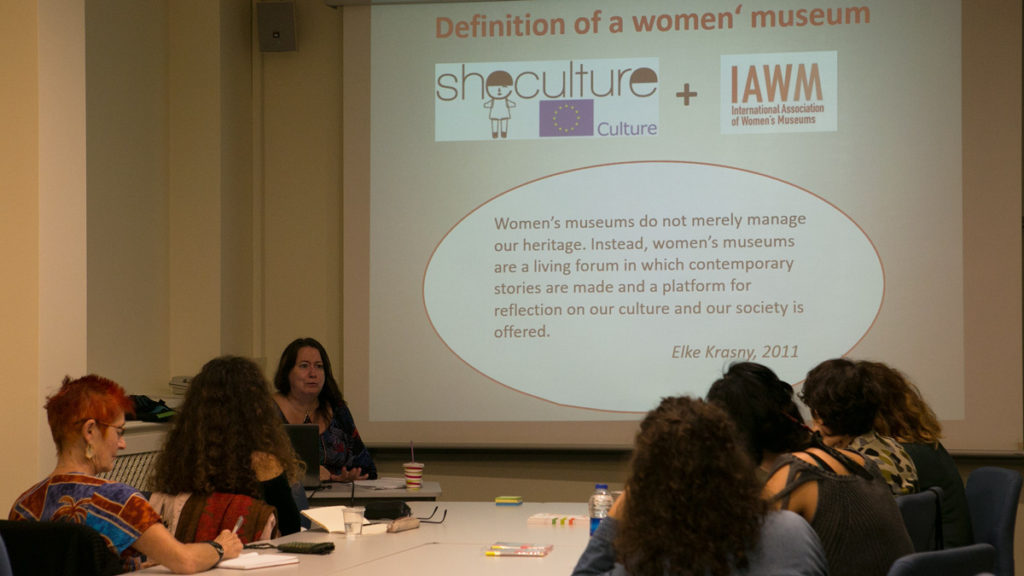 Other members of IAWM conducted workshops during the conference:

“After talking about different approaches of women’s movements that work with textile art to express resistance against oppression as well as to show their desires to overcome these situations, we worked with the technique of the Mexican movement „Stitching for Peace“. The participants of the workshop started to stitch and to express their desires for a peaceful world. The pieces of embroidery will be part of the exhibition of the Museum of Women’s Cultures Regional – International, in Fürth  in 2019.” 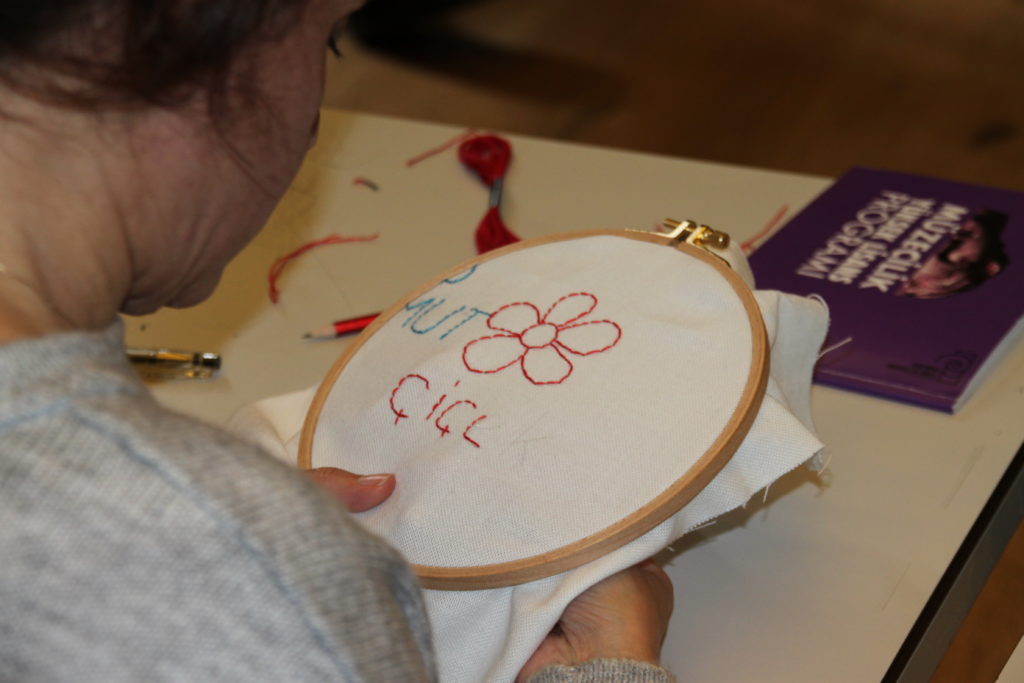 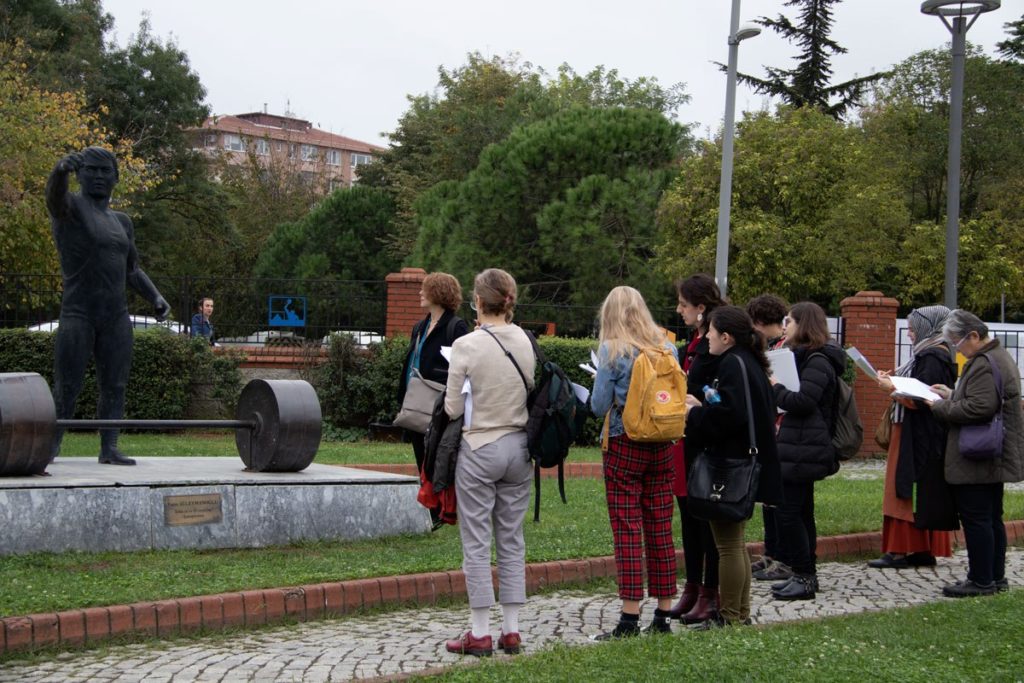 “Sites of Girlhood is a large scale global project by the Girl Museum to put girls “on the map.” Girls around the world have been part participants and, at times, victims to some of the greatest moments in history. Their stories are more important than ever, shedding new light on our history while giving us a unique view of our hometowns and home countries. The Sites of Girlhood workshop in Istanbul was very successful. We received excellent feedback about the project, its design, and even 10 contributions for the production when it goes live. My facilitators were terrific and one, Nazli Noyan, an artist and illustrator, is helping us design a logo for the project.” 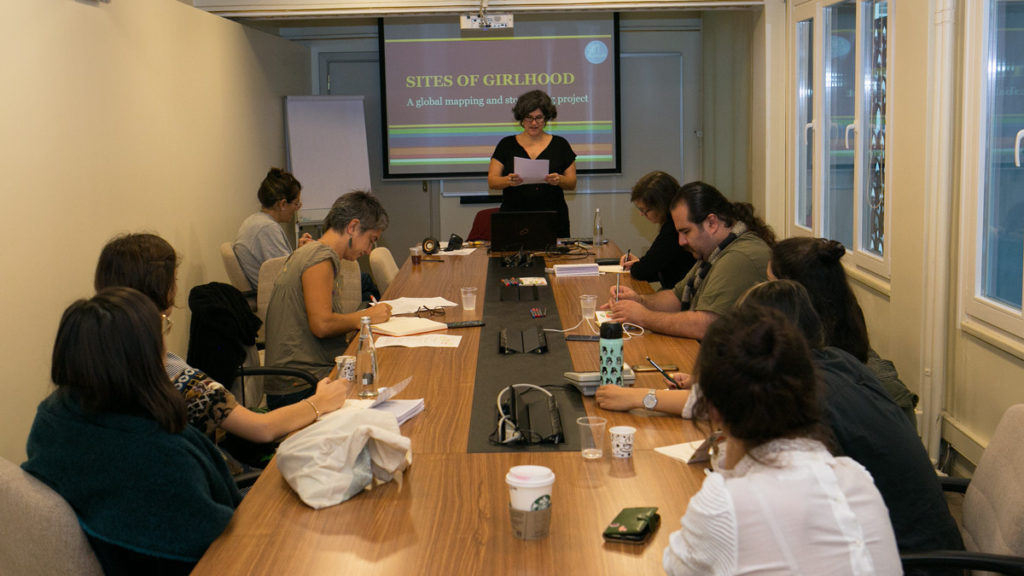 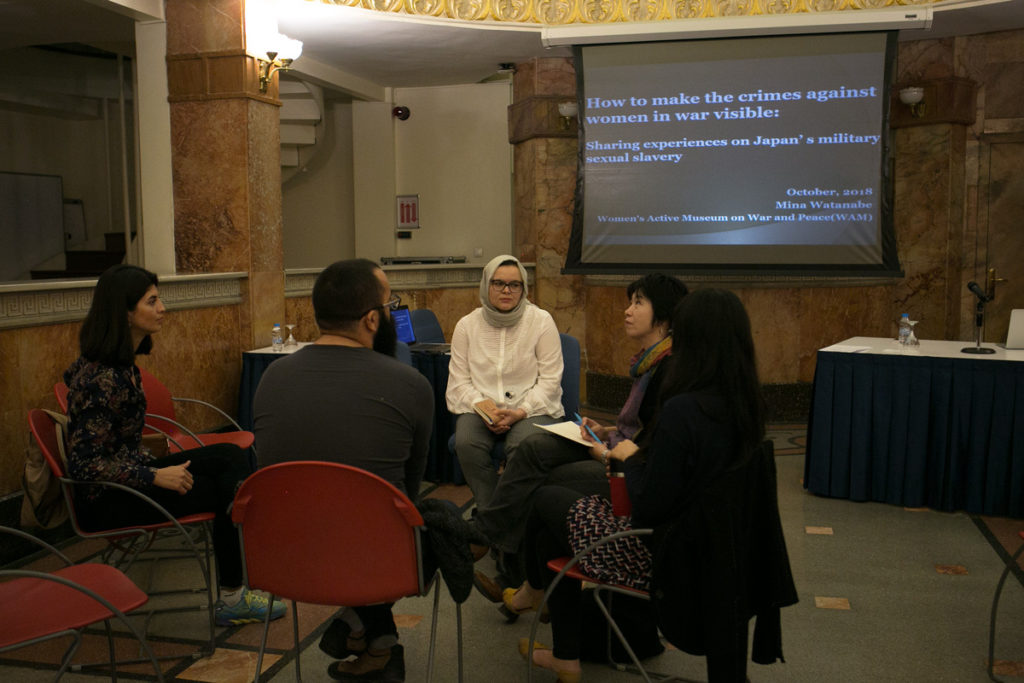 Furthermore the program of the conference included guided tours in Istanbul with the title “Curious Steps: Gender and Memory Walks” by SU Gender. Terri Bell-Halliwell, from inVISIBLEwomen took part in one of them:

“I was so pleased to take part in one of the “Curious Footsteps” walks in Istanbul run by the Su Gender Department of the University. The walks tell the stories of those whom history disregards; the minorities, the LGTBQ, the undocumented. Amongst the many moving stories was that of the first Muslim actress, Afife Jale, which has had an unexpected result. Afife was ostracised by her family and community for her career choice but went on to become very successful. She acted in an Istanbul theatre, which has latterly become the Rex Cinema. The Curious Footsteps walking group always stops outside the cinema to tell her story. Imagine their surprise to find a bust of the actress installed there. 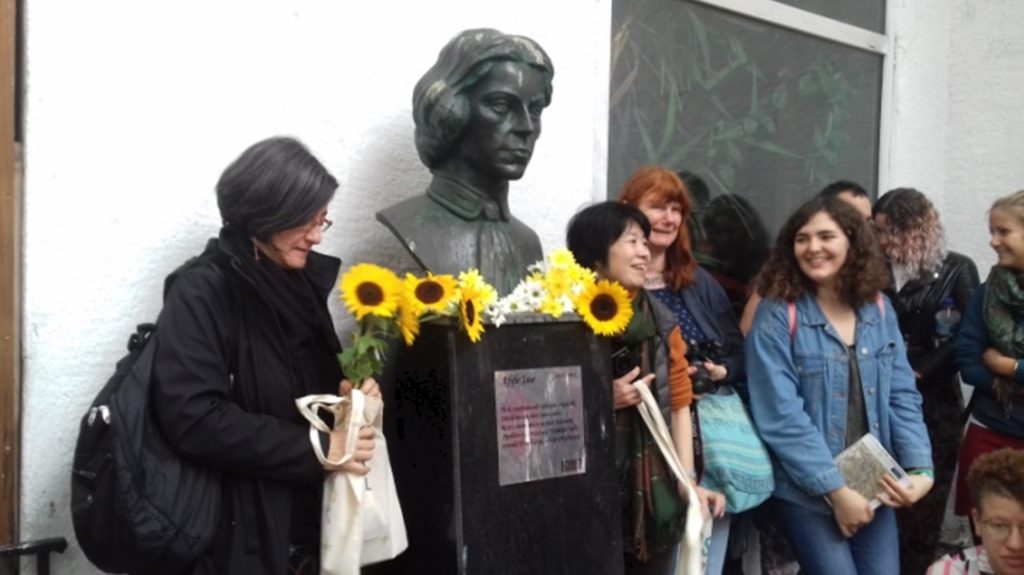 Curious footsteps group celebrate the installation of the bust

It seems that the repeated telling of her story inspired an architect to sculpt her bust and donate it to the cinema who agreed that it should be installed on the spot where the Curious Footsteps groups come to hear the tale of the brave and famous Afife Jale. Here is one great way to make sure women are no longer airbrushed out of history.” 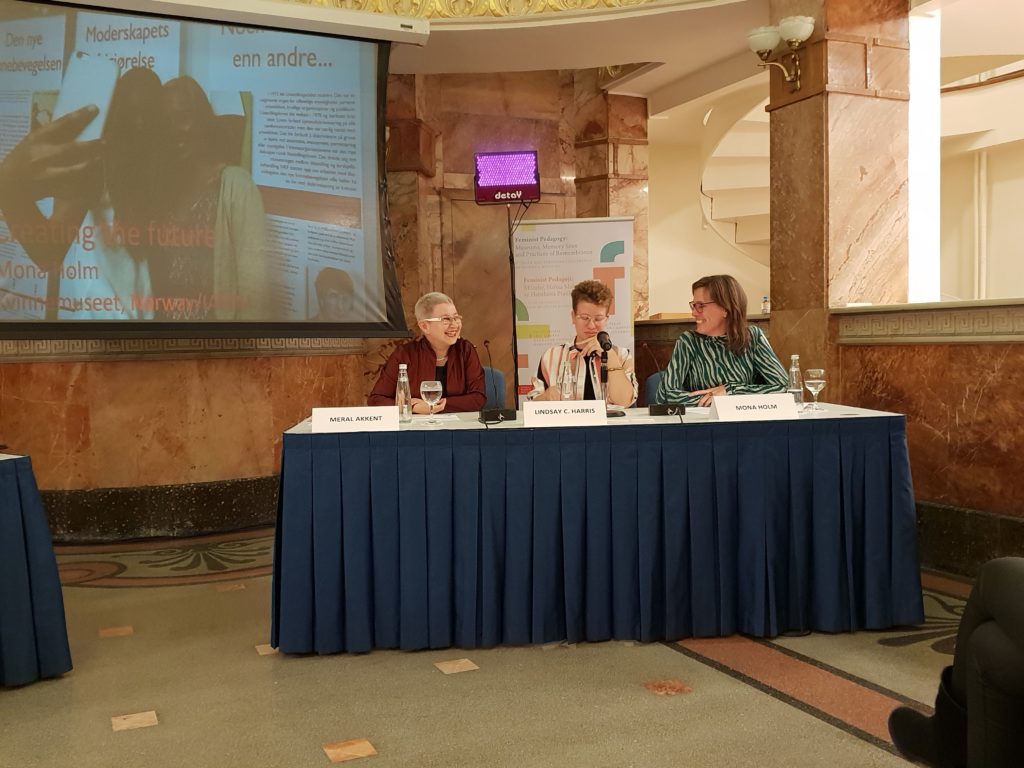 During this panel Lindsay C. Harris explained how LGBTQ+ found a place in a department of the Brooklyn Museum through art and intersectionality.

We would also like to mention the contribution of Cihan Koral to the conference, who managed to introduce feeling to the meeting over and over again.

The conference was accompanied by a very special exhibition called “UnEXPOSED?”, which was curated by Meral Akkent and Women’s Museum Istanbul. Based on the past exhibitions of women’s museums globally, this exhibition explores the possibilities of exhibiting histories and memories of violence without reproducing images of violence. Displaying concrete examples of remembrance practices that enable contact and communication between people, give new meaning to rebellion and hope, and create lasting symbols, this exhibition serves as an example of putting feminist pedagogy into action.

Four weeks after the conference the Women’s Museum Istanbul has given the exhibition as a gift to Sabanci University where it will be on display in a central corridor as permanent exhibit. 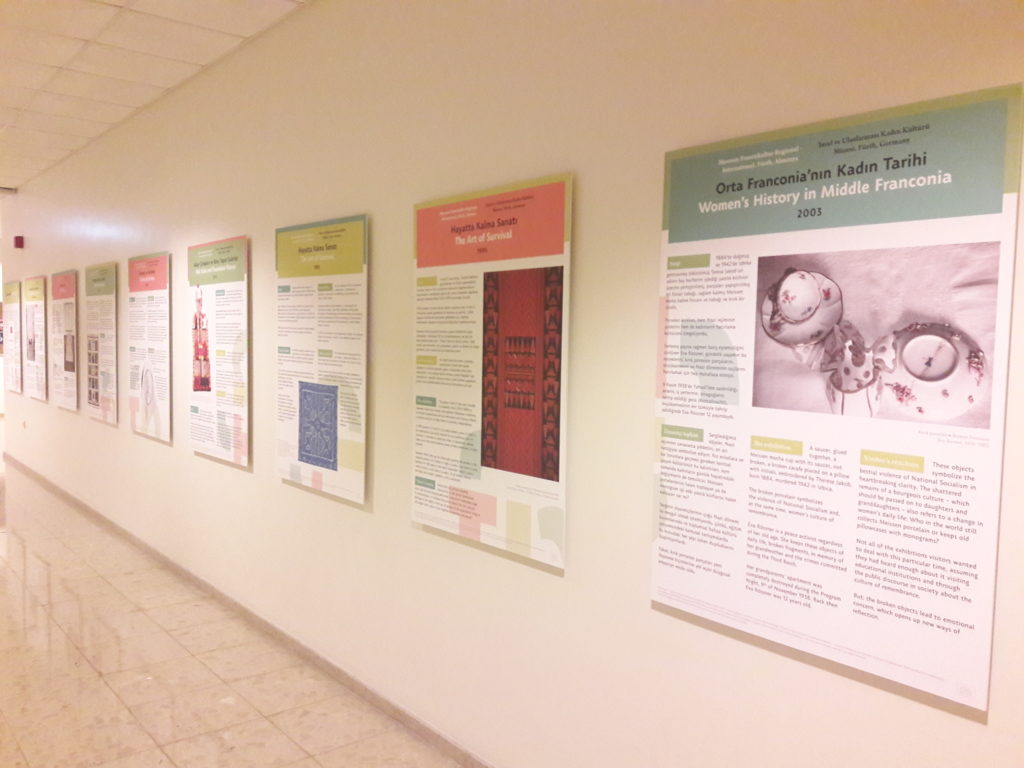 Video documentation of the conference:

Please find here other reports of the conference:

Report of the Museum of Iranian Women’s Movement Initiative

Report of the Girl Museum

Program of the conference

Photos of the Women’s Museum Istanbul

END_OF_DOCUMENT_TOKEN_TO_BE_REPLACED

END_OF_DOCUMENT_TOKEN_TO_BE_REPLACED
« Older Entries
Manage cookie consent
In order to provide you with an optimal experience, we use technologies such as cookies to store and/or access device information. If you consent to these technologies, we may process data such as browsing behaviour or unique IDs on this website. If you do not give or withdraw your consent, certain features and functions may be affected.
Manage options Manage services Manage vendors Read more about these purposes
view settings
{title} {title} {title}
Share This