News at the Women’s Museum of Mexico City

At the end of the First World War, Virginia Gildersleeve, Dean of Barnard College, Caroline Spurgeon, professor of the University of London and Rose Sidgwick of the University of Birmingham decided to create a world organization that united university women, in order to avoid another war, this was the origin of the International Federation of University Women (IFUW).

In 2015, IFUW changed its name to Graduate Women International (GWI) in order to attract a larger number of members. GWI fights for women’s rights, equality and empowerment through access to quality education, and training for the highest levels of leadership. GWI seeks that 100% of girls and women in the world have a higher education than elementary. Currently, GWI has national affiliated associations in 60 countries and individual associates in other 40 and is a consultative body of the UN.

After its re-foundation, the Mexican Federation of University Women (FEMU) joined IFUW in 1992, during the XXIV Triennial Conference of the IFUW in Palo Alto, California, although previously it had already been part of this Federation in 1927.

FEMU is proud to belong to this network of women who fight for a world of equality and peace where everyone has access to education and contributes to the integral development of peoples. 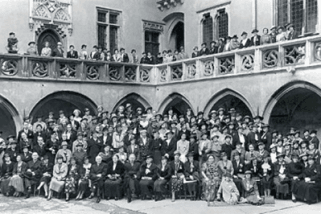 On May 15, 2019, the teacher’s day, Dr. Mirella Feingold received the University Merit Medal from the Dean of our university for her 50 years of service as a teacher at the UNAM. FEMU congratulates our Executive President for her deserved recognition.

Our most important event was the editorial presentation of the book “Perspectivas sobre las mujeres en México: Historia, administración pública y participación política”. This book illustrates how women have been made invisible in the areas of administration and political participation, making a historical journey to demonstrate the inequality they have had in all public and private spheres.

END_OF_DOCUMENT_TOKEN_TO_BE_REPLACED

END_OF_DOCUMENT_TOKEN_TO_BE_REPLACED
« Older Entries
Manage cookie consent
In order to provide you with an optimal experience, we use technologies such as cookies to store and/or access device information. If you consent to these technologies, we may process data such as browsing behaviour or unique IDs on this website. If you do not give or withdraw your consent, certain features and functions may be affected.
Manage options Manage services Manage vendors Read more about these purposes
view settings
{title} {title} {title}
Share This