The 9th of March 2018 the Iranian Women’s Movement Museum was inaugurated in exile with the exibition “From Evin, with Love”.

This important event took place in Humanity House in Den Haag, the Netherlands.

The exhibition consists of objects of handicrafts made by political women prisoners in the Evin Prison in Iran, and photos and biographs of these women. Some of the objects are made as gifts to the children of the women, whom they were not able to see during their long time in prison. Some of the women are still prisoners.

The International Association of Women’s Museums was invited to the inauguration, and our president Mona Holm made a speech on behalf of all our members all over the world.

This museum and exhibition is a truly extrordinary achievment. We are so proud of having Shirin Ebadi as the Godmother of our International Association of Women’s Museums, and we support her wish that one day they will be able to open their Women’s Museum also in Teheran. 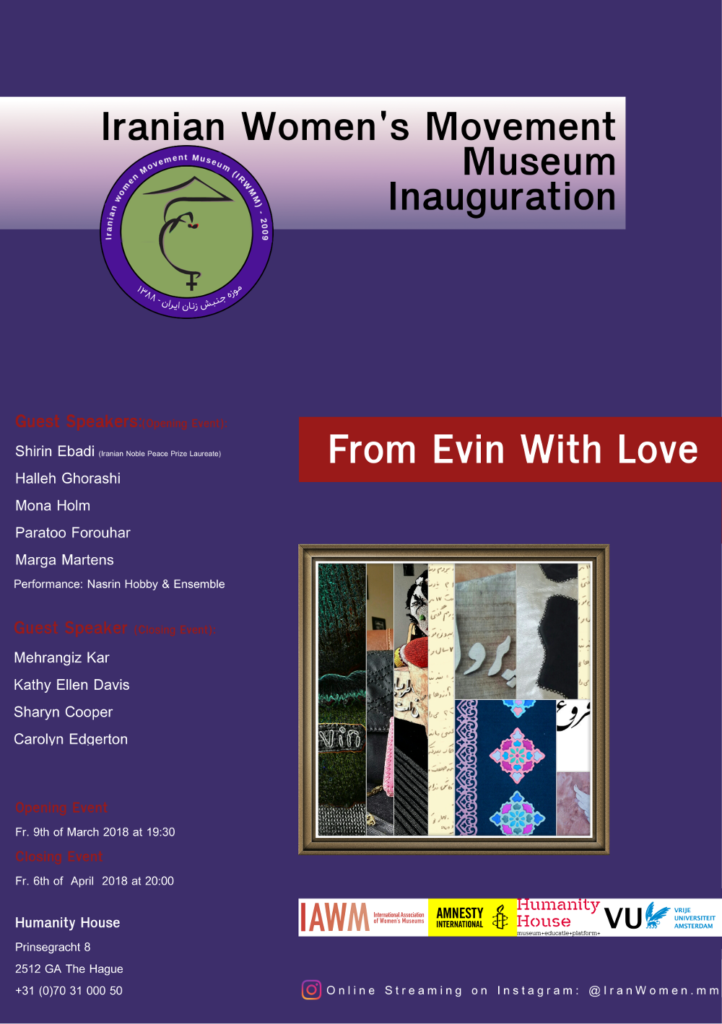 It is a tremendous pleasure for me to be here with you at the Humanity House in Den Haag, today, the 9th of March 2018.

I am invited here as the president of The International Association of Women’s Museums and I speak today on behalf of our colleagues in women’s museums all around the world. For our organisation, the opening of the exhibition “From Evin with Love” is of the highest importance.

The first time I met Mansoureh Shoajee was in our own women’s museum in Norway in the small town of Kongsvinger. She came on a study visit in December 2010, and stayed with us for two weeks. This was her last stop on a training tour to four different women’s museums in Europe. She wanted to see different ways of organising collections, staff, research, exhibitions and education programmes in our museums in order to be prepared to plan and later establish an Iranian Women’s Museum herself in collaboration with former Nobel Peace Prize Winner, Shirin Ebadi.

I had heard of Mansoureh and her work already at the very first international meeting between different women’s museums. This took place in Meran, Italy, in 2008, and was the first time that many of the women’s museums got to know about the existence of others. Mrs. Shirin Ebadi was invited as this conference’s godmother. At the conclusion of the conference, she said the words that later have become a slogan for our organisation, and I quote: “The Women are the Ones who write the History of the World! There has to be a Women’s Museum in every Country of this World.” Mrs. Ebadi later agreed to continue as a godmother for the women’s museums globally, something we are most grateful for.

This important conference in 2008 was the work of our dear colleagues Astrid Schönweger and Sissi Prader from the Italian women’s museum in Meran in collaboration with the women’s museum in Senegal. They made an enormous effort to be able to reach out to and invite women from all Continents to a three-day conference, where we got to know each other and decided to form a Network. Four years later, at the International conference in Alice Springs, Australia, the women’s museums founded a proper International Organisation, and named it The International Association of Women’s Museums. The registration was later made in Bonn, Germany by the first president, Bettina Bab from Frauenmuseum Bonn, who is present here today. Both Astrid Schönweger, who is the coordinator and driving force of our organisation, and Sissi Prader, who is our treasurer and co-opted member of the board, send their warmest regards to you all and congratulate you with the opening of the Iranian Women’s Movement Museum’s very first exhibition.

Today there are, as far as we know, 88 women’s museums around the world, 17 of these are virtual, and there are 44 initiatives to make new women’s museums. These museums are quite different from each other. Anyway, we do all have in common that we have struggled to be able to give women a history, and a specific place to find cultural expressions told by women from women’s own perspectives – and, in spite of all challenges, we have been victorious in this mission.

The problem is that we, the women, do not find our history in the majority of traditional museums. This is why brave women from different countries all over the world, independently, and several of them without knowing about each other, have founded specific museums for women’s history and culture and called them Women’s or Gender Museums. The explanation of the lack of women’s history in traditional museums is a more complex question, it is a part of the universal dilemma of the patriarchal tradition, and the answer cannot be found only inside the museum sector.

Anyway, since creating a women’s museum means that you are criticizing the museum situation in your own region, your own country, and globally, for not being democratic, you are forced to meet resistance. It can be hard to face accusations on a regular basis being on your own. This is one important reason for having created the International Association of Women’s Museums: to mutual support each other in our important work to give women all over the world a history and an identity.

It is fundamental to create networks and to support each other. We have to continue our collaboration to give women their rightful place in history. I end my speech with Manoureh Shoajee’s own words from the open night at the Norwegian women’s museum the last day of her stay December 2010.

“via recognizing my brave global sisters in this network […] now I believe that I am not alone and I could continue what we have started […] and expand it […].  And, finally, via [… contemplating] your museum’s exhibitions […] I can tell you who I am: […] I am a woman of the Gulf; my life is in pledge of the purity, peace and serenity of the waters. […] I come from […] the heart of all the red and black seas and from across all the barren and brittle deserts, and from the valleys, and from the waiting fields, I can carry the fresh message of peace and friendship among women. […] I am beholden to Shahrzad, the storyteller’s inheritance, who, with her womanly prudence and the kindness of her words, blocked the roads of the fiend of devilry and massacre and murder, as much as one thousand and one nights.

Now, this is my song, which resonates with the song of [the Norwegian poet] Dagny Juel,:

Stille, Stille [= Silence, Silence]!
We are the sisters of Shahrzad…
We will propagate justice, equality and peace in the world
So, not to be eradicated, ourselves
Stille, Stille!”

Congratulations and the best of luck for the Iranian Women’s Movement Museum in the future!

END_OF_DOCUMENT_TOKEN_TO_BE_REPLACED

END_OF_DOCUMENT_TOKEN_TO_BE_REPLACED
« Older Entries
Manage cookie consent
In order to provide you with an optimal experience, we use technologies such as cookies to store and/or access device information. If you consent to these technologies, we may process data such as browsing behaviour or unique IDs on this website. If you do not give or withdraw your consent, certain features and functions may be affected.
Manage options Manage services Manage vendors Read more about these purposes
view settings
{title} {title} {title}
Share This