Against Violence Against Women

IAWM’s statement on violence against women, an important issue for all of humanity.

Laura Volgger, “On Remembrance”, a performative art installation. The public was asked to bring chairs, to which the names of victims of femicide, demands, slogans and concerns for society as a whole were attached. Photos: Claudia Tessaro

For too long, many women have been resting on the achievements of our mothers and grandmothers. In most countries, we have felt legally protected and that our bodies belonged to us. And that it was our choice to reach for the stars. While obstacles to equality still are pervasive, like the glass ceiling, the wage gap, and omnipresent sexism, in many parts of the world, it seemed like there had been real progress. However, we lulled ourselves into a false sense of security. Violence and femicide are daily realities and the culmination of inequality globally. To stop all forms of physical and social violence, we take to the streets to show our anger. The more colorful, the louder, the more creative, the more effective.

What we DON’T TOLERATE ANY LONGER:

From now on, we take the space we rightfully deserve. 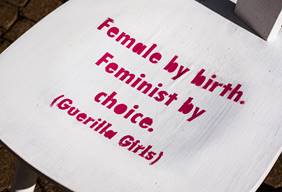 We call for the 1993 Declaration on the Elimination of Violence against Women ensuring women’s rights to be free from violence to be implemented and enforced. We demand men do their fair share of care work and to share in economic and social opportunities. We will continue to call for men to stand up and fight for equality and against misogyny.

These are our demands and we will continue to fight and march for them together!

Note: This text was originally provided by the organising team of the Women’s March in South Tyrol and it has been adapted by the IAWM.