Altogether there are 9 so called ‘comfort women’s – museums in the Asian-Pacific- area. One was founded in Japan, the country of the perpetrators; the others are located in countries attacked by the Japanese: in Korea, The Philippines, China and Taiwan. In the Taiwanese capital Taipei I visited the third ‘comfort women’s’ museum on my trip. Luckily my accommodation was both situated in walking distance to the second oldest district of the Taipei, Datong, with its sights and to the women’s museum. On my sightseeing walk through this quarter I run into the Dadaocheng Wharf, the Chen-Tian-Iai-Residence -a beautiful mansion of a former tea trader, the Lin-Liu-Hsin-Puppet- Theater-Museum and the Xiahai City God Temple – one of the most important religious sights of Taipei. The temple area is always a very vivid spot where you can watch believers sacrificing and praying by following special ceremonies. Sightseeing combined with shopping and a visit to the women’s museum – you get it all in Dihua-Street, which is famous for its well preserved historical buildings, its traditional shops and – last but not least – the women`s museum. While taking a stroll my eyes and my nose were especially triggered there. I was wondering about the various and many times strange-looking products offered. From time to time a terrific smell was irritating my nose: different sorts of mushrooms, dried fish, snails, root-like objects, nuts, dried herbs, medicinal plants and spices. With all these impressions I finally stumbled into the AMA-Museum. 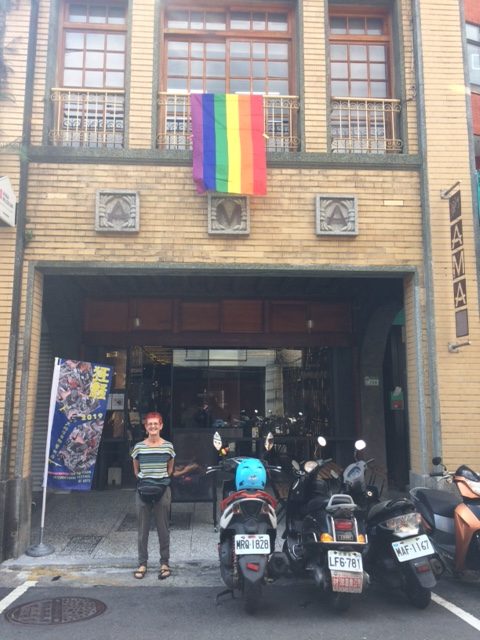 Before my visit I contacted the manager of the museum, Ms. Lami Yu-Ling Feng. She organized an English speaking guide for me. Thus, I got the benefit of a guided tour, led by a woman with great knowledge, Ms. Joy Hung. I felt highly welcomed. But it is worthwhile to visit the AMA- Museum even without this special service because all the texts are translated into English.

A museum for recovering and strengthening mental health

What do you know about your grandmother? What woman has she been? What life did your granny live?

Questions like these arise at the beginning of my guided tour, when Ms. Hung explains the meaning of the word “AMA” after which the museum is named: “AMA means grandmother in our language and stands for a tender and loving expression that Taiwanese people used for their grandmas since the end of the 17th century. With time passing the meaning of the word broadened and today `AMA` represents a respectful term towards women of the elder generation in general. On our journey through the museum you will come to know some Taiwanese AMAS that had to suffer from many hardships during their lifetime.”

The idea to establish this museum goes back to KIM HAK-SOON, the first woman that made her fate as a socalled `comfort woman`public. This happened on 14th of August, 1991. Since that time this day is honored as the “International Day of ‘Comfort Women'”. The museum was launched by the “Taiwanese Women’s Rescue Fund” (TWRF), an organization that began to deal with the issue of ‘comfort women’ in 1992. For years research work was done in the name of all victims. They figured out that there existed around 300 000 sex slaves in the Asian region, 2000 of them of Taiwanese origin. The TWRF installed a hotline to find survivors who were willing to expose their names to the public. Thus, the basis for the museum are the 59 AMAS who contacted the TWRF and gave evidence about their painful experiences.

While walking through the museum you will find art works. As gentle as the word “AMA”, they fit into the exhibition rooms. They enable you a sympathetic understanding of the contents presented, without many words. One of these art installations refers to the 59 courageous AMAS, without them the museum wouldn’t exist. It’s titled: “Song of the Reed Walk” and decorates the “Memorial Corridor” dedicated to the survivors. For me this artistic installation also represents the general sensitive attitude of the people running the museum towards the former sex slaves. With more than 1000 cylinders hanging down from the ceiling of the corridor the art work remembers the nameless victims of the rape camps. In between, 59 metall lamps project the names of the’comfort women’ survivors mentioned above. Holding your hands like a bowl underneath the light, you can read the name of one of them on your palms. It feels like holding her in your hand and protecting her. Maybe you feel how fragile life can be. The quote of the bible besides the artistic installation refers to the resilience, the AMAS needed to survive:

A bruised reed he will not break, and a smoldering wick he will not snuff out. In faithfulness he will bring forth justice.

“Song of the Reed Walk”

At the end of the memorial corridor you enter the “Women’s Power Space” with its exhibition called “Wellness Workshops”. In the first moment this term is highly irritating for me because my ears are tuned to “wellness” as pleasure, holidays and a sense of well-being. But then I figure out that here the notion is used as a “healing” word. The paintings exhibited here were made by former sex slaves during therapeutical settings. With professional help the AMAS were able to go through very painful processess that helped them to overcome the brutal experiences, they had to face as ‘comfort women’. Within 16 years (1996 – 2012) 178 paintings came into being during the workshops, 73 of which belong to the collection of the museum and are exhibited alternately. With this therapeutical work the museum fulfills its claim to be a “place of healing”. The following quote of a former ‘comfort woman’ shows how precious it was for her to participate:

The feeling of finally having my path understood is like a big stone falling from my heart.

As my English speaking guide leaves, I go back to the paintings to get a closer feeling. They don’t need further explanation, they speak for themselves. Subsequently I walk through the exhibition rooms a second time, from the end to the beginning. This time I concentrate on those contents which already attracted me during my first informative guided walk. Even in the part of the museum that is labled “place of memory” and reflects about the historical facts ( the permanent exhibition on the 1st floor: “Comfort Women”), I find touching details how the museum worked with the AMAS. As they knew that their life dreams couldn’t be fulfilled they initiated a special project, called: “Realizing Her Dream”. The idea was that each of these women should be able to fulfill her former dream at least for one day in her life.So the TWRF asked them: “What was your dream as a young woman, as a girl?” AMA HSIU-MEI, for example, wanted to become a stewardess when she was young. Thus, the TWRF made it possible for her to work for one day as “the oldest stewardess of the world”. It was with China Air, when she was 93 years old. That`s just great! For her this experience stands for education, for qualification and possibilities and for freedom – all of this not possible for her at her young age.

While passing by I take a closer look at the campaign that the TWRF initiated in 1999 to demand reparation payment from the Japanese government. I remember what my guide told me about it: ” According to international law only a nation may file a law suite against a government, not persons. 70 years after a war the claims come under the statue of limitations.” With these informations in my head I thoughtfully leave the exhibition rooms. Once again I read the questions which open up the issue for the visitor, when entering. It is the core question that strikes me a last time. It refers to the voluntariness of the `comfort women`, that time and again is used from the Japanese government to refuse taking over responsibility: 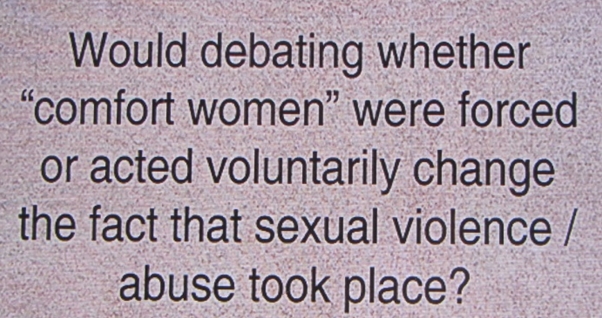 Now I walk through the corridor pictured with photos from the lives of the former sex slaves. At the beginning of my visit they offered a first possibility to meet the AMAS. Now I remember that in 2016, when the museum was opened, only 3 of the 59 women were alive, on an average of 90 years. In 2017 the last “officially known” AMA, CHEN LIEN-HUA, died at the age of 93. All of a sudden I realize how important these `comfort women’s’ museums are. Who else would keep in mind this part of human history?

END_OF_DOCUMENT_TOKEN_TO_BE_REPLACED

END_OF_DOCUMENT_TOKEN_TO_BE_REPLACED
« Older Entries
Manage cookie consent
In order to provide you with an optimal experience, we use technologies such as cookies to store and/or access device information. If you consent to these technologies, we may process data such as browsing behaviour or unique IDs on this website. If you do not give or withdraw your consent, certain features and functions may be affected.
Manage options Manage services Manage vendors Read more about these purposes
view settings
{title} {title} {title}
Share This