Women artists occupied the Piazzetta in front of the Gemäldegalerie in Berlin, Germany under the motto fair share! Visibility for Women Artists on International Women’s Day, Monday March 8, 2021.

Between 2 and 3 p.m., a performative action took place in which female visual artists in association with cultural workers from other disciplines will symbolically stand up for more visibility of women in the arts and culture sector.

The action is initiated by an alliance of women artists that had already organized a demonstration in front of the Alte Nationalgalerie for International Women’s Day last year and is working on processes to promote a change in awareness for the purpose of gender justice in the art business. This year’s action was planned with many representatives of Berlin women artists’ associations and initiatives. 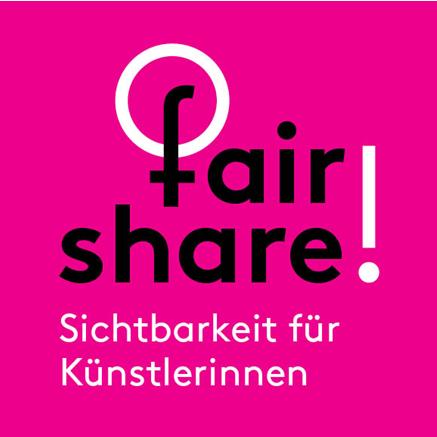 Under the label fair share! Sichtbarkeit für Künstlerinnen (Visibility for Women Artists), a 56-page brochure with all speeches of the 2020 demonstration has been issued. We would be happy to send it to you digitally or in print.

Please contact the members of the Action Alliance with any question at any time: 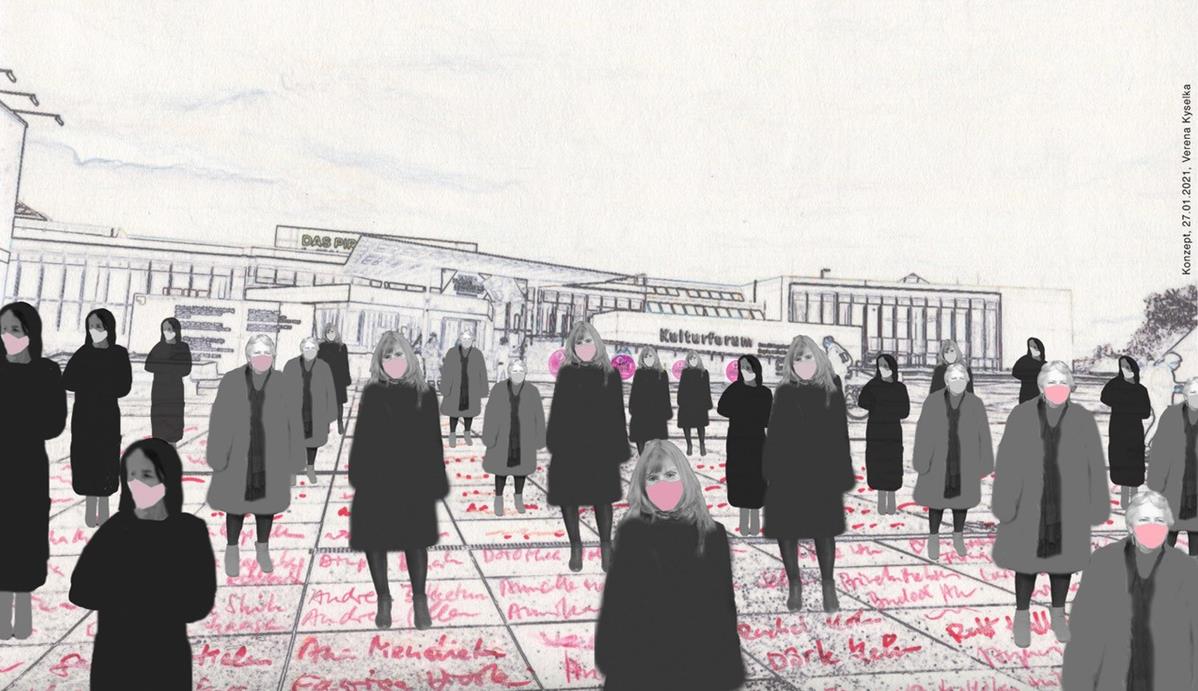 The protagonists take up positions on the sloping piazzetta. Overlooking the construction site for the planned Museum der Moderne and, on the right, the Neue Nationalgalerie, which is about to reopen after a long period of renovation, several dozen women artists form up for the performance on the inclined plane. They write the names of female artists from all centuries up to the present day on the granite slabs, thus referring to the location – with historical art in the Gemäldegalerie at their back, and with those of classical modernism and the 20th century (yet to be placed) in view. At the same time, about 500 names of women artists from all epochs are read aloud.

In this way, the abundance and visibility of those women artists who, beyond Münter, Modersohn-Becker, Goncarova, Kollwitz and Höch, have helped to shape and continue to shape art history is revealed in image and sound. The performance is flanked by banners that focus on current grievances with figures and graphics.

More than 150 years after the founding of the Berlin Association of Women Artists, 100 years after the opening of German art academies to women, and 50 years after the first action of the Guerrilla Girls, the discourse on gender equality in the art business is slowly reaching the public. Women professors at art academies, museum directors and collection managers are no longer rare, women are equally represented in committees and juries, and grants from public funds have usually been awarded on equal terms in recent years. National institutions such as Berlin’s Martin-Gropius-Bau or international museums such as MoMA or the Tate Group are now taking gender-equitable approaches. A start has been made.

And yet, gender equality in the art world is still a pipe dream. Recent studies such as those of the German Cultural Council (2016/2020), as well as statistics of the bbk berlin based on the figures of the Künstlersozialkasse show that the gender gap is still evident and is even wider in the art business than in other industries (31%; 2020; tendency increasing). The figures are not only known in the artists’ associations; the Federal Commissioner for Culture and the Media, Dr. Monika Grütters, also claims to be aware of the inequality, but effective measures from her department are still a long time coming.

Today, almost 60% of art school graduates are female. However, solo exhibitions by contemporary women artists do not even account for one third of the programs of almost all major museums in the country. The NRW Forum Düsseldorf is far ahead with 31% of solo exhibitions by female artists in the last 20 years; in all other museums for contemporary art, the proportion is much lower.

The situation is similar with regard to the presence of contemporary women artists in the museum’s collection. In the Hamburger Bahnhof – Museum für Gegenwart Berlin, works by only three women artists were on view in 2020.

In the art of the 20th century and especially before 1900, the number of works created by women artists in the show collections is quite often less than 1% – although exhibitions such as last year’s show Kampf um Sichtbarkeit – Künstlerinnen der Nationalgalerie vor 1919 at the Alte Nationalgalerie in Berlin prove that museums do own works by female artists – but hidden in the depots.

The treatment of women artists then and especially today can therefore be improved considerably. As long as contemporary women artists continue to be underrepresented in group and solo exhibitions in the publicly funded, institutional art scene, as long as the acquisition budgets of large, visible, and internationally recognized institutions in particular are spent primarily on art by men, and as long as the press and publications favor male artists, the commercial art market will not follow suit. In addition, public funding or residencies contribute significantly to the added value of an oeuvre and are often awarded to those who can distinguish themselves through flexibility and unbroken vitae. Women artists with care responsibilities are at a great disadvantage.

Moreover, the social and economic implications, as well as the culturally conditioned, misogynistic prejudices that have been cultivated for centuries, are of little help on the way to more gender justice in the art business. Comments such as those by Georg Baselitz are just as counterproductive as the current corona-induced re-traditionalization of gender roles and responsibilities or German tax policy.

There can be no talk of equality in the art business even in 2021. Therefore we continue to demand

END_OF_DOCUMENT_TOKEN_TO_BE_REPLACED

END_OF_DOCUMENT_TOKEN_TO_BE_REPLACED
« Older Entries
Next Entries »
Manage cookie consent
In order to provide you with an optimal experience, we use technologies such as cookies to store and/or access device information. If you consent to these technologies, we may process data such as browsing behaviour or unique IDs on this website. If you do not give or withdraw your consent, certain features and functions may be affected.
Manage options Manage services Manage vendors Read more about these purposes
view settings
{title} {title} {title}
Share This