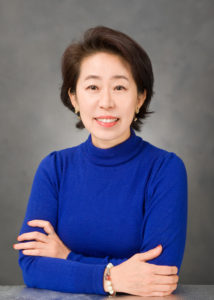 Function at IAWM: Board member of IAWM

Biography: Longing for a fundamental change in society, I major in Russian history. I graduated from Seoul National University (M. A. and Ph. D), with a thesis on Russian Modern history in the context of the spread of Russian modernity and the social changes it brought. Russian women’s history and comparative history led me to encounter with the idea and space of women’s history museums. Women’s museum for me is thus a space to put my knowledge into practice and to enhance human rights and dignity. I want to contribute a little stone to build the great mosaic of a gender equal world.

Museum: I am the director of the National Women’s History Exhibition Hall. This is the first women’s museum in Korea founded by the Ministry of Gender Equality & Family in 2002. It attempts to shed light on women’s roles in Korean history over five thousand years. It was first established in Daebang-dong, Seoul, and moved to Goyang City in 2014 to make a new momentum for the further development. The museum focuses on women’s history and culture. The most distinguishing characteristic of NWHEH is that it uses high-technologies and state-of-the-art digital media to overcome the disadvantages of a small space. As an active museum, we seek various ways to reach citizens, we intend to be a cultural platform of women in local and global space, and raise important issues in society through exhibitions and educational museum programs. Currently, the biggest task of the NWHEH is to get an independent museum site, along with collecting women’s artifacts scattered around the country.

Why am I working at IAWM?

I am the representative of peoples who are trying to establish the women’s museum not only in Korea but also in Asia. I think that IAWM lives up to its beliefs for solidarity and sisterhood of all women. Women in Asia are facing rapid changes, while conflicts between traditional and contemporary values are more severe in Asia than anywhere else. I believe that the women’s museum will be a space that would help reproduce and preserve the history and culture of women. The network with the IAWM helps identify Asian women’s unique values and generality. I will be committed to convincing more Asian women will join the IAWM. It is my dream to build a new women’s history museum in Korea in the near future and hold the IAWM Congress here.